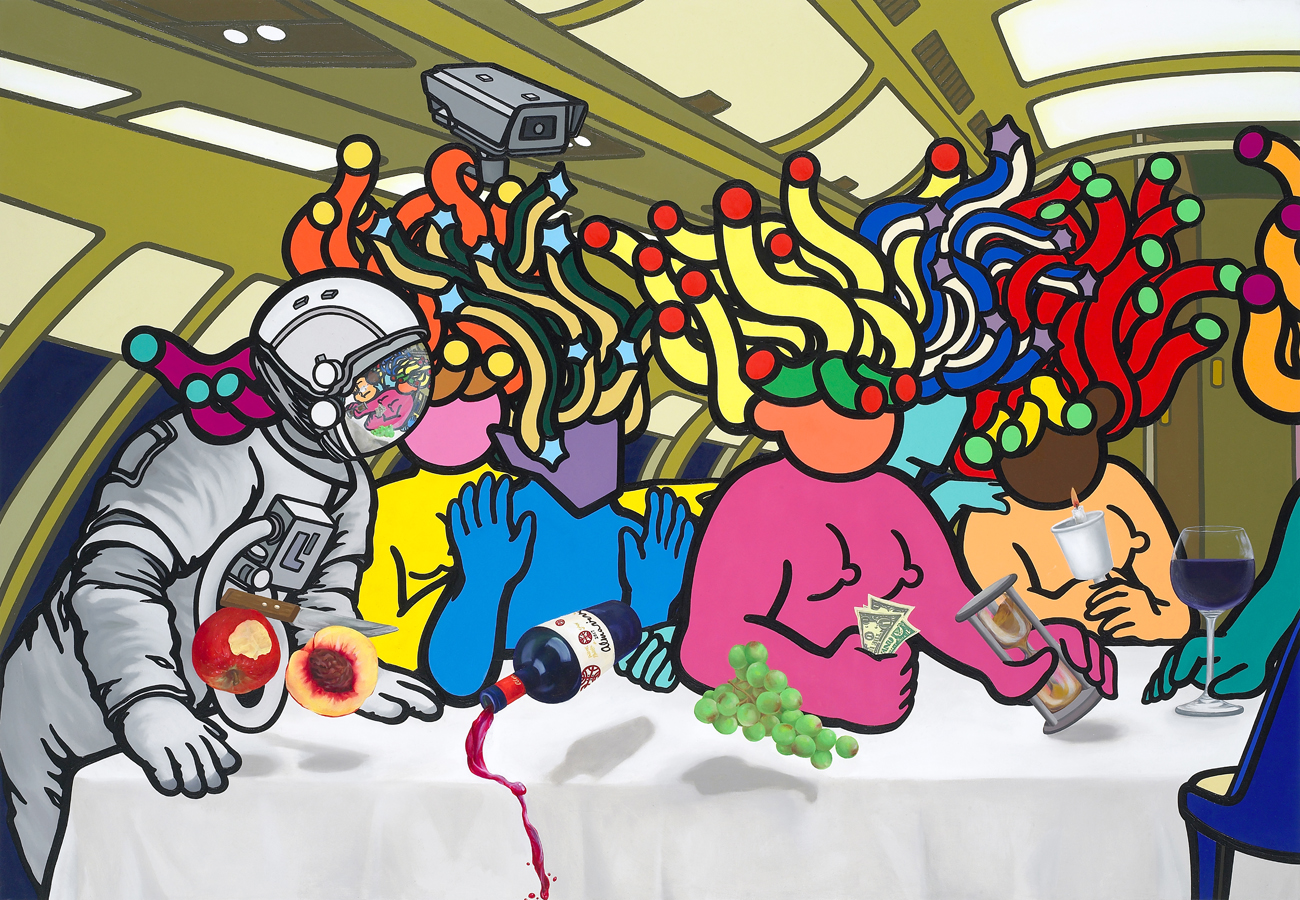 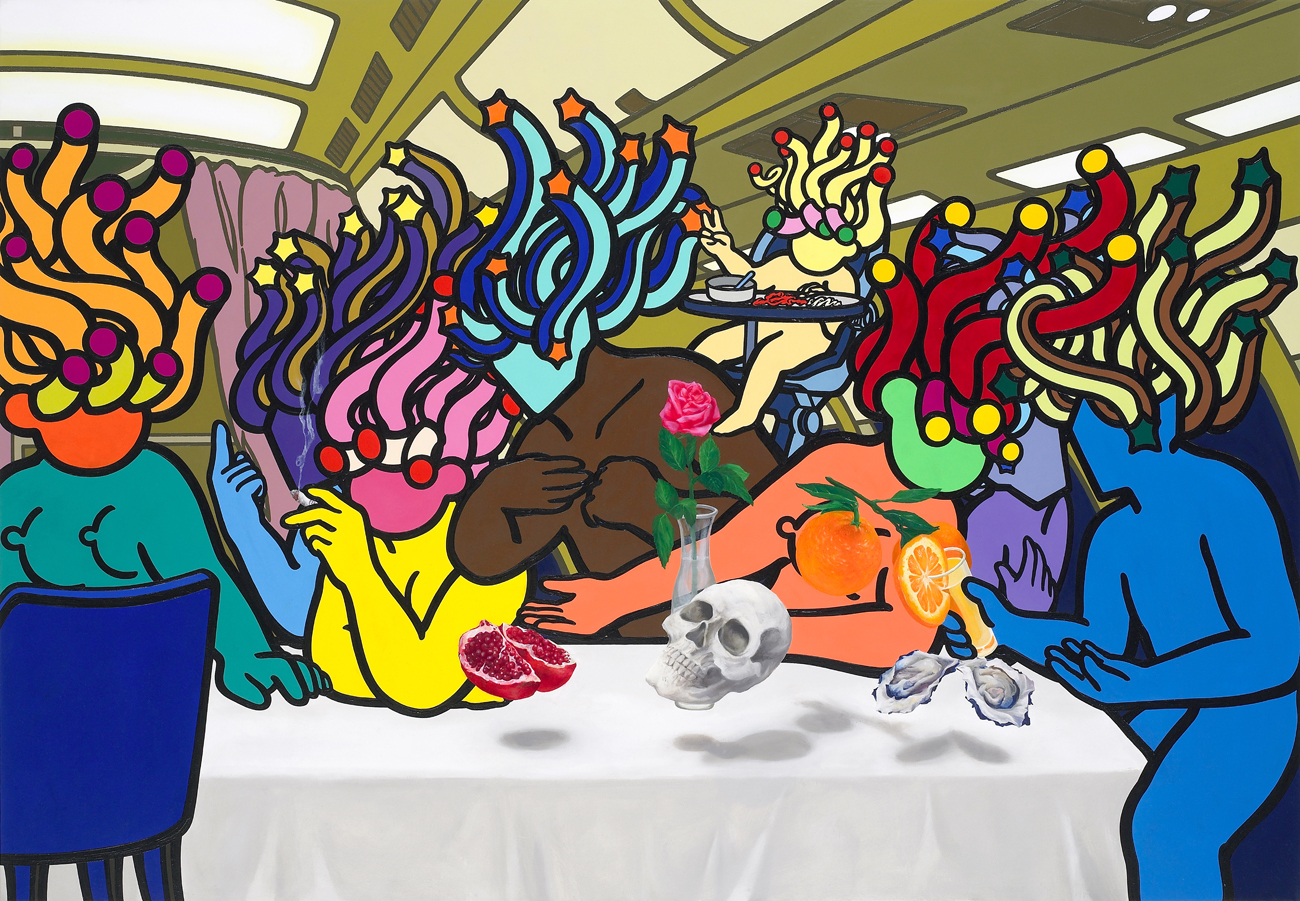 This painting, which started from a question on our attitude towards the future, represents the futility of current social systems and endless human desires (metaphorically) by borrowing an image from a historic painting.

Leonardo da Vinci depicted, ‘The evening’ before the day of the crucifixion of Jesus in his painting, ‘The Last Supper’. At this important meal, Jesus said that someone would betray him among the twelve disciples, and each disciple responded in his own way. I interpreted and painted them with my own symbolizations, with the idea that those twelve disciples can be seen as having twelve distinctive characteristics of human beings: One may conform, doubt, actively and defiantly adapt, or worry when accepting the uncertain future.

In my previous work, the dinner table was defined as a place where people enjoy the things presented on a table. In this work, I put an empty seat in the middle of the canvas to invite the viewers and ask them their opinion: “How do you want to enjoy the dinner?”

The distinct differences from the original painting are the location (it is now on an airplane), characters (specifically, a child and an astronaut), and objects on the table. Thus they have their own symbolic meanings.

Being on an airplane can be an extremely dangerous and anxious situation because one has to put their life into someone else’s hands: a pilot. However, people today do not care too much about this situation. Also, once you are put in this confined space you are left with only one option – You must stay in the cabin until the plane lands. In the cabin, you become either the one who watches or the one who is being watched.  Your every action is observed and controlled. CCTV in the painting represents this situation.

Of course, one may find the joys of his dream and imagination from the thrills of his trip and the view from the window.

People today often fly on planes. The current world where people are connected to others thru Social Network Service allow or ask them to share every moment of their traveling and those people have created a new desire to certify their adventure by others. I imagine in the near future Space travelling will become the hippest thing to do and the most desirable destination for travelling in the 21st century. People will love to be recognized as a space traveller. So the image of an astronaut shows that future desire.

The cultural changes in the 21st century are happening in cyber space; in other words, they happen in the Internet. In this cyber space there is no gravity. Thus, the shortest distance in this world is not linear, and our common notion of perspectival space is not valid. As we can wander everywhere with just a click, we are living in a spider’s web where speed matters the most in this non-gravitational space. Using this notion, I painted the objects on the table floating in the air.

The objects in my work are symbolic representations, as in Vanitas’ still life painting of Netherlands in the seventeenth century: Fruits with rich juices, natural objects that will perish, a rose that will wither, money, an hourglass, a skull, candlelight, the smoke of a cigarette, the reflection on a helmet. All symbolize human desires, the futility of life.

When working on this painting, there were candlelight vigils everyday in the city center of Seoul by Korean asking to the Parliament to impeach the President of South Korea. The candlelight in this painting captures my feelings at that time. I knew that this would be a historical event of our present and the future.

I hope that the wriggling desires represented through the floating objects and dancing hair of the characters, can be seen as a positive wish to our future, and direct a question about our concerns: How do you want to face the future?