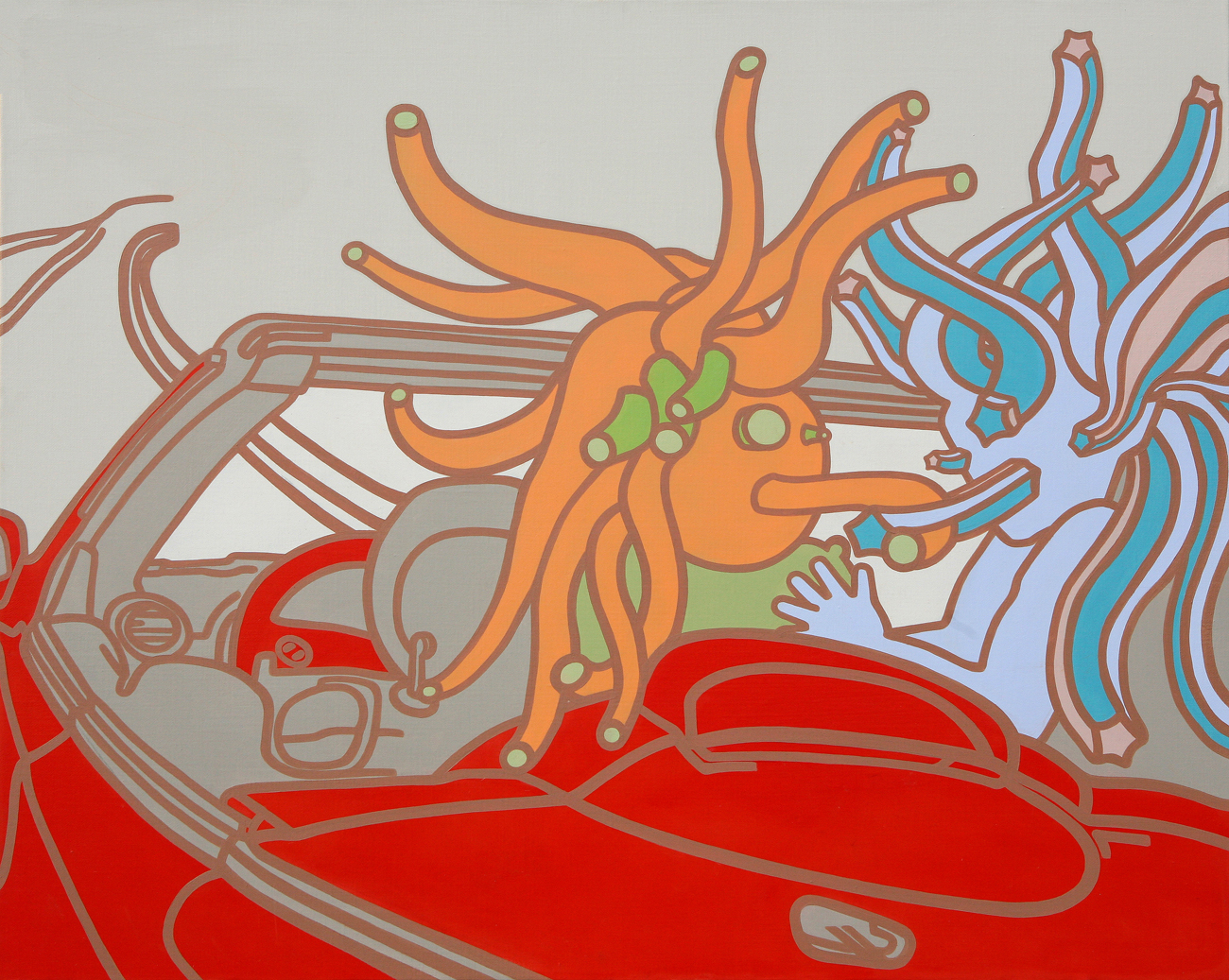 The ‘relationship’ and ‘intercourse’ between Mayo and Mato

Nari Choi’s paintings consist of very simple colors and shapes, opening up a space of mutual communication between men and women, and one person and another. Choi’s works develop a story within the paintings’ spaces with the symbolic codes of a male and a female, which are created through images of mayonnaise and tomato ketchup tubes. In other words, the motif of Choi’s painting is composed of small stories about ‘differences’ and ‘relationships’ between men and women that she experiences or understands and by combining the experience of tastes and images found in everyday life.

As if the layers of sensation felt in everyday experience are divided into fine thicknesses, Choi’s work is symbolized by the characters ‘Mayo and Mato’, forming an organic space, and at the same time, reducing it to a planar surface with very clear lines and colors. The noteworthy points in the planar configuration scheme using colors and shapes are that firstly, ‘Mayo and Mato’ have become the main motifs of the painting in small stories, and secondly, the space with ‘Mayo and Mato’ that symbolize men and women. ‘Mayo and Mato’ form a one-to-one relationship or a group of men and women. Despite the neat configuration of colors and shapes, the surface projects a subtly dynamic image. Perhaps this is due to the concise composition, the various colors, and the way the space is constructed in harmony with the theme of the painting. 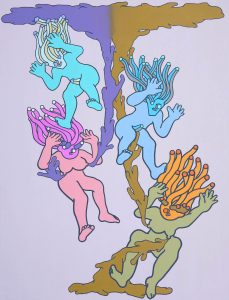 With 100 to 200 works, Choi fills each with a composition of coordinated colors and lines on the smooth surface without allowing any gaps or any traces of brush strokes. For example: <Dance dance>, shown in this exhibition; <Camouflage>, which means ‘disguised’, show a ‘relationship’ with emotional bonds only with ‘Mayo and Mato’ without any background; <Slide of greed>, which shows the way one’s desire is revealed; while <Ssh ~!> portrays human society as a rich space. Nevertheless, in Choi’s paintings, I face emotions flowing through the gap between those lines and colors. This is because – as shown in the simplified composition of the characters ‘Mayo and Mato’ – Choi’s skill of coordinating the forces that occur between the changes of color and form, and dynamic movements shine in the abstraction of emotions.

Our lives within a family and society are composed of a man and a woman, and are in a complex network of other entities that are closely linked to the members of family and society; they are structurally and functionally integrated. In the works of Choi, she emphasizes only the relationships between men and women or between humans through very bright and clear colors, rather than the image of a human in a complex network. In short, Choi focuses on emotions that arise from the ‘intercourse’ of men and women or the ‘relationship’ between people while eliminating social background and environment.

Humans interact either directly or indirectly. In addition, humans have the strong effects on nature and urban ecosystems, and, at the same time, they are also influenced by the artificial environment created by themselves. Likewise, human survival grows and changes through the field of mutual communication with other individuals. In this way, the process of socialization will be on the basis of ability to control ourselves and to balance life on the premise of human inter-relationship. The relationship between human beings, the ability to self-control, and the balance of life shown in Choi’s paintings are in a relationship that is completely pure and devoid of any insincere or superficial surface.

Our present period has been achieved through the development of civilization for many years. The history and culture of humans have created our advanced technology through frequent trial and error, and they will continue to pursue a better life in the future. Additionally, as we become accustomed to civilization the pure and original sensitivity will gradually be lost. Perhaps it may be more important to find the sense of one’s body rather than focusing on rational judgements armed with all kinds of knowledge and information obtained from today’s advanced technology. In the busy city life, the confrontation with the pure human sense is for the sake of restoring our presence.

‘Mayo and Mato’ in Choi’s paintings are based on the premise of confrontation with the pure sense while taking off the burden that surrounds the life of modern people. Therefore, we confront the attributes of nature – which also communicates with our primitive senses – as we do with human nature. The body or nature that we encounter in Choi’s painting is a trail of everyday life in which the sensitivity of the artist explores the relationship of life and love. It is the relationship between you and I, and a space of communication between people. Modern human beings, projected on ‘Mayo and Mato’, are reflections on the relationship between creation and extinction: through the relationship between one body and another body, a part of a body, hair that spreads from a part of a body, and liquid that is released from a body. The resonance of colors and forms that portray such human ‘interjections’ or ‘relationships’ serves as a factor in achieving its own pictorial realization through a sense of primitive life and sensuous formality.

The works of Choi at the current exhibition – <Conversation>, where the place is specified; <You, who are too heavy for me>, an image of a man with uplifted arms as if lifting weights; <On the contrary, is contrary>, an image of ‘Mayo and Mato’ hanging upside down on a safety line – show a way of interpreting men and women as constructed through the perspective of the artist. Moreover, although there are differences between works, <a shameful Mayo>, <His & Her wavelength>, and <Rainbow heroine> reveal the personal experience reflected in ‘Mayo and Mato’, and the form of human nature and desire in diverse ways such as ‘intercourse’ and ‘relationship’ which develop from external objects. Furthermore, <Mato is a pants-soiler> embodies the desires of input and output by the use of cute characters while expanding the relationship between self and other. 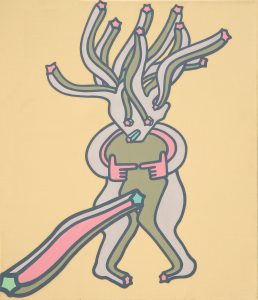 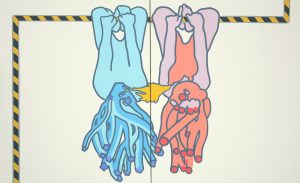 Thus, the paintings of Choi reveal the basic human need to let viewers look at social desire regarding the relationship between themselves and others. With the use of characters, ‘Mayo and Mato’, the image of the relationship in which human desire is communicated is visualized by the smooth texture and the simple image that characterize modernity and the boundary of the social relation of an individual and a group. The boundaries of Choi’s perspective, the social relations of an individual and a group projected in ‘Mayo and Mato’, start from the setting of the self and proceed to the ‘relationship’ between humans through the emotional transaction that occurs between men and women. This is a new chapter in which the personal self or collective self communicates in the setting of the ‘relationship’ or the ‘intercourse’ where the artist encounters the psychological space of ‘Mayo and Mato’. For example, when the relationship between the self and the other in daily life penetrates into the artist’s sense, a new ‘relationship’ is created when a new visual relationship is formed. ‘Mayo and Mato’, which sweeps the painting space of Choi, is perhaps a link in our lives, a link between a man and a woman or a human and a human, self and other, virtual and real, etc. It may be a passage that strips away the strangeness of modern people. This passage is the place to relieve a sense of desire, which then becomes a place for aesthetic communication and a place where the lack of desire reveals the anxiety and loneliness embodied in the characters ‘Mayo and Mato’. Likewise, Choi’s paintings, which are reduced to vivid colors, lines and planar surfaces, eliminate vague boundaries and foster a sense of ‘intercourse’ or ‘relationship’ through concrete shapes that fill the deficiency of desire. Although such a deficiency was filled one day when the artist created the characters called ‘Mayo and Mato’ while eating mayonnaise and tomato ketchup, the extension of the deficiency growing in the hands and minds of the artist will create a new field of communication through various links, with individuals and groups communicating with a firmer vitality.

Although we are left with the task of making various attempts to move towards the ‘relationship’ or ‘intercourse’ of Choi’s ‘Mayo and Mato’, there is a great tendency to expand the field of communication across everyday life and its boundary. Above all, what I can expect is that the affectionate perspective of Choi does not rest on her reality, but she has a willingness to discover new fields of communication through insights on ‘relationships’ or ‘intercourse’.